Ryanair: When Complex Adaptive Systems bite back!
26 December, 2020 by

Ryanair is Europe's largest airline and is probably the first modern day organisation to build a successful business model based on despising its customers, its people and its suppliers. It could do this because it provided a variety of benefits that were sufficiently attractive to overcome the psychological pain and abuse that these stakeholders often felt.

Notoriously awful to its customers, it compensated by providing extraordinarily cheap airfares to a wide variety of destinations and on a regular basis. By picking struggling, remote regional airports, its large volume of visitors offered a tremendous boost to the local economy and, by providing a large number of relatively glamorous, unskilled work to young, inexperienced  people, it offered large volumes of low-paid, low-skilled employment in the glamorous world of travel. Lastly, it offered an entry point for large numbers of people whose ambition it is to join the glamorous club of the airline pilot. In bringing these together, they developed a complex adaptive systems (CAS) that on balance, provided a win-win for all those involved, despite the many downsides.

As the CAS developed and evolved, other airlines began to copy the business model that Ryanair had earlier copied and bastardized from Southwest Airlines. In doing so, the other airlines began to bridge the enormous price and cost gap that Ryanair had opened up and that fueled their enormous growth and profitability. The cheap fares airline ecosystem that Ryanair built in Europe began to change as competitors copied the low coast model and piggy backed on Ryanairs development of local airports and low cost travel infrastructure. Importantly however, these airlines valued and were more respectful and appreciative of their customers and staff.

Recognizing the relentless ever-closing of the competitive advantage gap they had opened in  the airline industry, Ryanair changed their attitude to customer service in an attempt to fend of the growing threats from their competitors. However, like a dog that had been continuously beaten by its owner for years, the new found enthusiasm for great customer service was greeted by a wary customer base, particularly given the clenched and gritted teeth through which its CEO, Michael O'Leary spat out the new strategy.

As the CAS that is the low cost airline industry continued to grow, the downtrodden staff  that had found their first steps into the industry via Ryanair, now found that they had a wider choice of job opportunities in airlines that more respected and valued their skills and expertise, even if that respect was only marginal.

The well published personnel difficulties currently facing Ryanair are an inevitable consequence of the CAS viciously biting back. The growth in the industry that Ryanair fueled has now reached a tipping point such that the industry no longer needs Ryanair. Routes developed by Ryanair can be picked off by competitors who offer a better customer experience (not difficult) and whose growth can be be fueled by the masses of staff leaving Ryanair for airlines who treat them with respect and appreciation, even if that treatment is only marginally better. 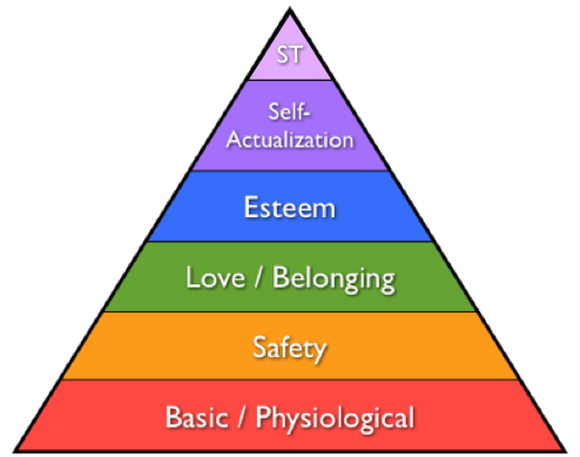 Bertram Russel pointed out that "in any autocratic regime, the holders of power become increasingly tyrannical with experience of the delights that power can afford. Since power over human beings is shown in making them do what they would rather not do, the man who is actuated by love of power is more apt to inflict pain than to permit pleasure."

In their book, the "Economy of Esteem", Brennan & Pettit make the point that "people are an honor hungry species" and people familiar with  Abraham Maslow's "Hierarchy of Needs" will know that once people have addressed their "base needs", esteem becomes the next great barrier and opportunity.

Providing people with the ability to develop and enhance their self-esteem is well recognized, by all but the most tyrannical and autocratic of people and organisations, as a vital building block in the development of a healthy, sustainable organisation. Healthy, sustainable organisations are in turn the basis on which people build functioning, fair, equitable and civilized societies and successful economies. While many organisations struggle with this challenge, few if any sensible management teams deliberately attack the esteem of its most valuable asset, its people.

The inevitability of Ryanairs long term demise can be found in the seeds sown by its founder and autocratic leader, Michael O'Leary. Unless those who have the power to make significant interventions in the ecosystem that is an organisation are organisational psychopaths, then all interventions will show short term benefits otherwise, even the autocrats would stop and try something different.

Ryanair has been fooled by the amazing short term benefits that have accrued to it and its CEO since he was appointed deputy CEO of the struggling airline in 1991. Blinded by those short term benefits, the longer term damage of Ryanairs culture of tyranny that O'Leary has cultivated are now coming home to roost. The revolution now being witnessed by the staff of Ryanair is not just an industrial dispute, its the expression of a festering sore that is Ryanairs management style cultivated with vigor by its autocratic CEO, Michael O'Leary.

While O'Leary was able go along with his organisations u-turn on on how to treat customers, its not possible for him to do a credible u-turn on how he views and treats his people and staff.  He has as much hope of rescuing Ryanair from its inevitable path to destruction as  Louis XVI would have had by standing on the walls of the Bastille and shouting to the baying crowds. "honestly lads, I was only joking, it was all just a bit of fun!"

Unless there is a revolutionary and radical grass-roots transformation of the organisation, Ryanair is doomed to follow the same path as those organisations who similarly have fallen fowl to the pitfalls first identified by Clayton Christensen in his 1997 book, The Innovators Dilemma. In his book, Christensen demonstrates how successful, outstanding companies can do everything “right” and yet still lose their market leadership – or even fail – as new, unexpected competitors rise and take over the market. While much of what Ryanair has done to date has shown itself to be "right" in the relatively short organisational lifespan that is Ryanairs, the fatal flaw sown into its DNA is now showing its ugly head.

The emerging people revolution in Ryanair is gaining momentum but Ryanairs managerial responses remain drawn from the values and behavior repository of old that has served it well in the past but are completely unsuitable for a modern, industry-leading organisation.

In an economy and society that only measure growth and profitability, there will be many writers and commentators on organisational performance  who cite O'Leary as a model of "how to get things done" leader. He has been touted as someone who should take over the leadership of the Irish  healthcare system, transport system or indeed the entire country.

As the revolution in Ryanair  gathers pace, hopefully those same writers and commentators will remember that only those who have benefited from the ill-gotten spoils of tyrannical and autocratic leadership have shown any desire for its return. Like Ouroboros, the snake that eats itself, Ryanair's leader has a voracious appetite for his own management methods, values, beliefs and behaviours, attributes that will eventually lead to its demise and destruction.

Alex McDonnell is CEO of Xpertivity where we believe that Leveraging the Power of People in Organisations  makes for a Better World.