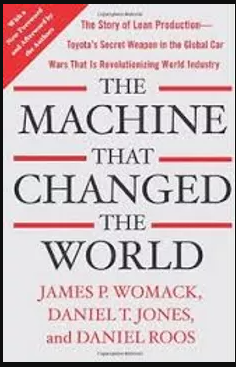 The Machine That Changed the World

At the risk of being branded a heretic, I'd like to propose that, in their seminal books on Lean (The Machine that Changed the World and Lean Thinking), Womack and Jones saw two distinct forces in action when they visited Toyota and which they mistakenly combined into their description of Lean.

Furthermore, the leading writers on Lean who have followed in their footsteps have built on the original error to compound the mistake.

I believe that this mistake is proving to be one of the main contributing factors to Leans failure to be adopted and/or sustained more broadly than it has been so far.

In much the same way that an optical illusion can appear to be two different things at the same time, Womack, Jones and their extended IMVP team saw two distinct forces in action on their visits to Toyota:

1) A suite of management insights, tools and improvement methods 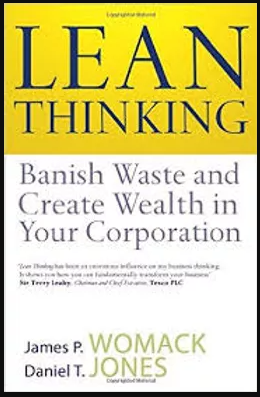 By combining both forces into the definition of Lean, a combination often referred to as "True Lean", they have done a disservice to the insights, tools and improvement methods that they witnessed in action and in turn limited their global application and adoption.

This is further compounded, by the practice of many academics and practitioners in the field, of using Japanese terms to describe these Lean insights, methods and tools. In doing so they perpetuate the myth that Lean is the "black art" of some long lost tribe of Sensei and whose membership is signaled by their proficiency and use of the complete suite of Japanese Lean terminology.

Some people also speak in hushed tones about how their Sensei was taught by the student of the student of Taichi Ohno forgetting perhaps that Toyota themselves confess to having little experience in deploying their customized production system (TPS) beyond Toyota and their supply chain.

Ohno himself leveraged the knowledge and learning from Toyota's previous innovations but he also traveled wide and far to seek out best or better practices in other organisations. He then  adopted, adapted and combined these into the Toyota Production System TPS, the management machine that would become known as Lean. 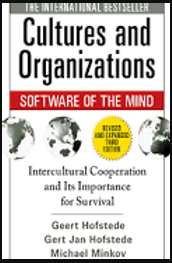 Modern organisations consist of a combination of sub-cultures which, if well managed, can combine to create one of several macro cultures. These macro cultures may and possibly should change over time, if an organisation is to effectively evolve and adapt to its changing environment.

In their book, “Diagnosing and Changing Organisational Culture” Kim Cameron and Robert Quinn identify what they describe as 4 major cultures which they set in a “competing values frameworks”. These 4 cultures coexist but compete in organisations and their relative strength and influence is determined by the stage of evolution the organisation is at, the values it embraces and its chosen competitive strategy.  The 4 major cultures are Hierarchy/Control, Market/Competitive, Clan/Collaborative and the Adhocracy/Creative. 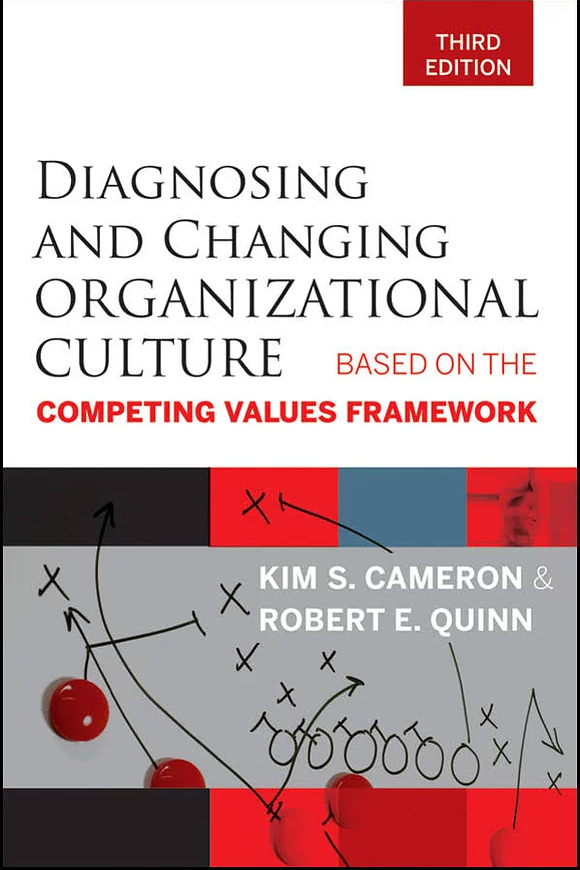 Edgar Schein is one of the great organisational thinkers and writers on culture and he goes further and describes organisations as having a matrix of sub-cultures.

Disciplines that are more culturally aligned (Sales & Marketing?) may find more synergy in working together than those that are  not (HR & IT?).

The horizontal dimension of the sub-culture matrix consists of at least 4 levels. These are Front Line/Operator, Mid-Level Management, Technical and Executive and these too can have cross-organisational allegiances. Front line operators are driven by their team’s social dynamics, technical (IT, Process, Operations) are driven by their black & white engineering value system and Executives by their need to focus on control and “the numbers”.

Mid-level managers remain a conundrum as witnessed by their common appearance on the list of major reasons why change/lean/transformations fail to sustain, particularly in service and knowledge work organisations. Often promoted because of their expert skill, they struggle to adapt to find a place in the cultural web that surrounds them, caught between where they came from and where they are trying to get to. 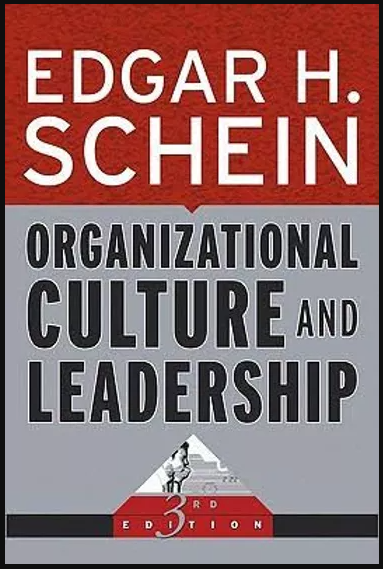 Much is written about the need for organisational agility but organisational culture is mostly viewed as a static attribute, to be honed and refined to the “one best culture”, a feature I find dominates Lean Thinking.

Cultural drift is a feature of organisational life and without the tools and methods to understand and shape it, organisations are doomed to sail the heavy seas of change, rudderless and out of control, at the mercy of faith and fortune.

Traditional Leans myopic view of a “one best culture for Lean” has been more influenced by its long pit stop in Japan, where its components have been enhanced and fashioned into an integrated, high performance management system (TPS), than the original home of its main components, the US.

This has limited Leans powerful arsenal of tools and methods to those charged with improving work methods and processes. Whilst most “Houses of Lean” contain at least two pillars, one for “tools & methods” and one for “People”, few if any tools are provided for managing Cultural Drift and Cultural Navigation. ( confession, I don't like the term "cultural change")

Critics of this paper will say that Leans focus on “Respect for People” is core to the values that underpin Lean. Few if any  modern organisational cultures do not include a respect people, although many show their respect in different ways. This is not to be confused with the abuse of workers perpetrated by dysfunctional managers, which happens across all cultures, although some cultures may facilitate it more than others. (See my article, "Why Good People Sometimes Do Bad Things")

Having spent some time at a senior executive level in the highly competitive, market driven culture of Dell Computers, it unambiguously defines its need for managers who will consistently (every quarter) deliver above average results. It shows its respect for people by making many of those who choose to work at Dell and are successful, millionaires.

Equally there were many at Dell who tried, failed and were asked to leave. In some cultures or value systems, this may be viewed as lack of respect for people but not so in others.

I was recently reminded of this when one of my colleagues toured a customer’s site where ServiceForce, our Lean Operations Management System for Service and Knowledge Work organisations. It was being used to help micro-manage over 700 staff at a business process outsourcing site that was driven by a bonus system heavily based on piece-rate work.

My traditional Lean training kicked in an I immediately thought how could I persuade the management team to move to a management system of “trusting and empowering the team to self-manage” and discard their “micro-management, piece-rate work driven methods”.

However, my colleague, who is equally proficient in traditional Lean Thinking, immediately read my thoughts and said that, in her extensive experience, she had never seen such a happy group of people, producing outputs at exceptionally high rates and to a very high level of quality for mission critical client processes.

The key insight we gained was that these people, not unlike at Dell in my time there, had been recruited to work in such an environment, including its management style and and reward systems. As such the culture they joined was perfectly congruent with their own values and expectations.

However, at a different site, where the staff had been transferred across from a client as part of the outsourcing agreement, no such congruence existed and the staff and management struggled to find a compromise.

Lean for the Masses

No organisational culture is of itself wrong, although many organisations find themselves with the wrong culture at the wrong time. This can happen as organisations navigate the evolutionary cultural path from the Creative Adhocracy through the Clan/Collaborative to Hierarchy and Control or Market/Competitive. By failing to evolve from one to the other (in both directions) and to maintain an appropriate balance, organisations can find their cultural balance inappropriate for where they are at a point in time.

Perhaps the most famous example of a near disastrous failure to navigate the cultural journey is Apple Computers. Started as a creative adhocracy by Jobs, Wozniak (& Wayne!) in 1976 it developed one of the most clan/family cultures in the world and this combination of Creative Adhocracy and Clan/Family culture drove their early successes.

Confronted by a growth crisis in the early 1980’s they hired ex Pepsi executive John Scully to take over as CEO. Sculley's "big corporation" controls most likely saved Apple from bankruptcy at the time however the dramatic change from the Creative and Family culture of old to the new Hierarchy and Control culture resulted in the creative genius behind apple, Steve Jobs being fired.

Apple limped along until eventually recognizing their creative and innovation deficit, rehired Jobs as CEO in 1998 having first bought his "Next Computers" 2 years earlier for $500M. Apples journey since then has now entered into folklore, having achieved the status of most valuable organisation on the planet.

For Lean to reach its true potential and diffuse across countries and industries, Organisations large and small, Industrial and Service Sectors, Multinationals and SME’s, it needs to jettison its Japanese backpack, including its terminology, and set it free.

With such freedom, Lean can and should embed itself in the many different organisational cultures that exist and through which organisations must navigate successfully, if they are to be be successful over the long term.